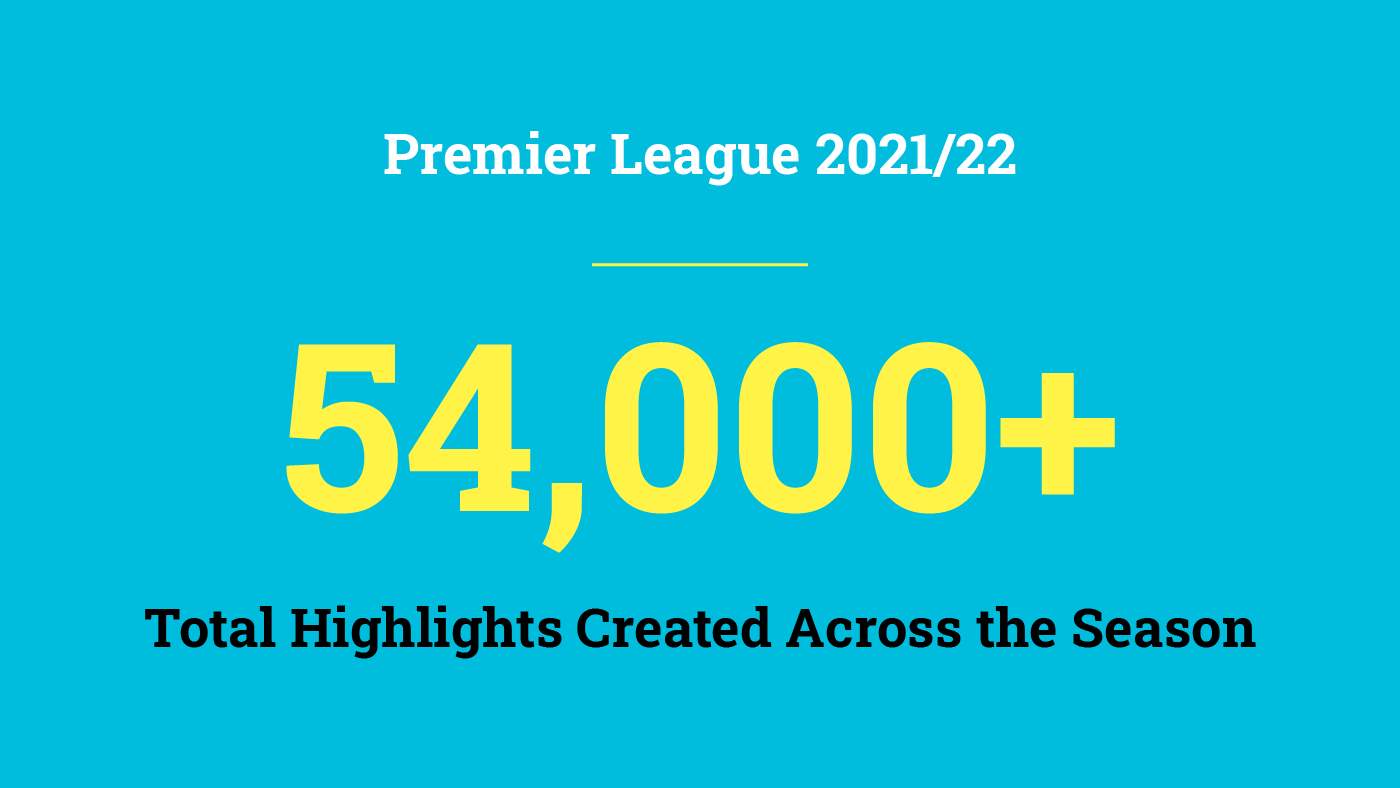 Premier League 2021/22: Telling the Story of a Season Based on Video Highlights Data

The 2021/22 Premier League season was unforgettable and tightly contested to say the least! The rollercoaster drama truly kept us entertained right to the wire, with the eventual winners only crowned as champions on the final day, as well as the all important top four Champions League places, and the teams relegated, all being determined only on the league’s final matchday.

During the course of the season there were so many memorable moments that led up to this dramatic conclusion. These moments were immortalized forever through thousands of video highlights.

Broadcasters and rights holders around the world used WSC Sports’ AI platform to automatically create highlights of all the action as it unfolded. In fact, they created more than 54,000 highlights during the enthralling 2021/22 season (based on usage data across WSC Sports’ clients). 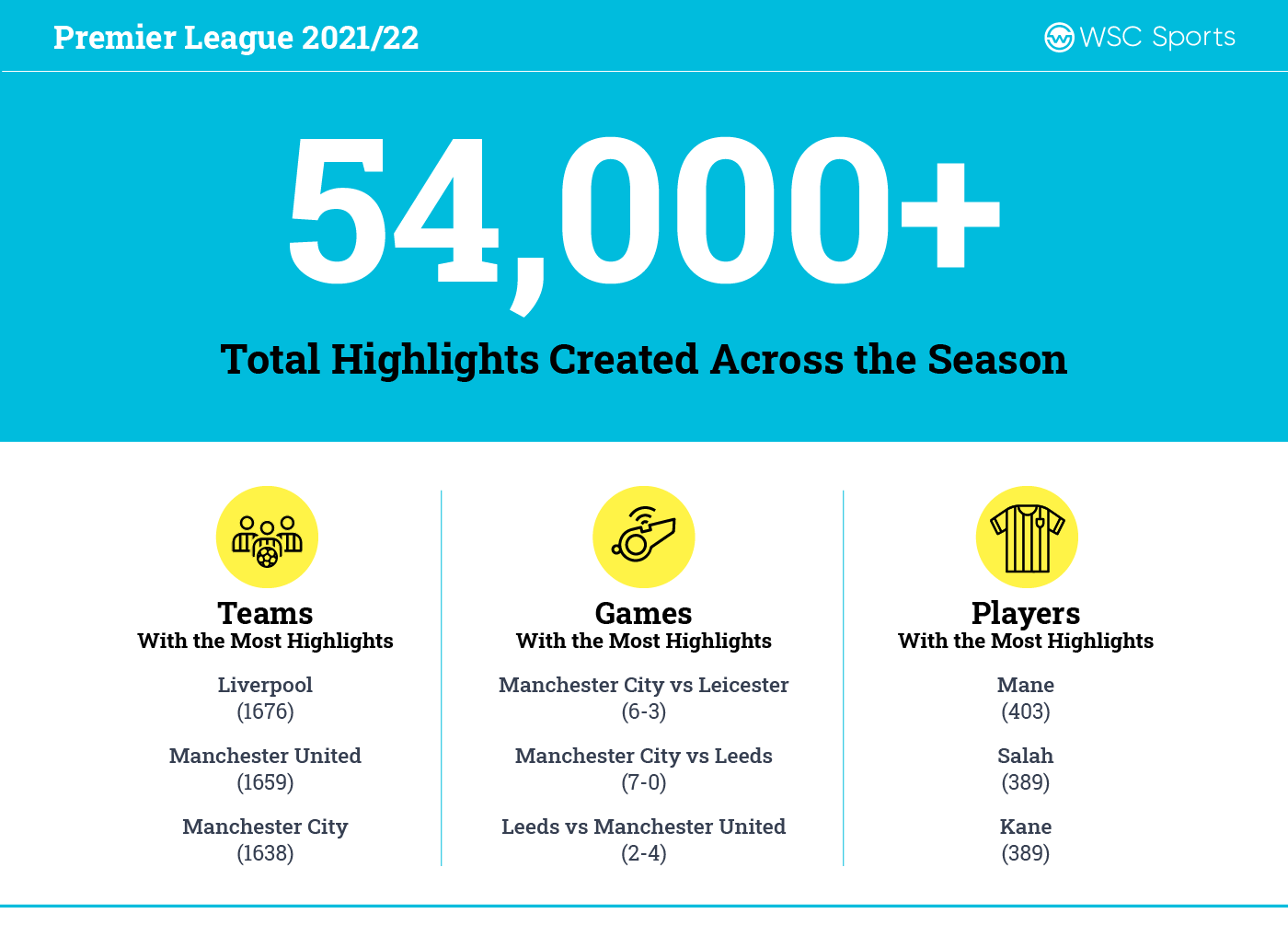 With content created at speed and at scale, WSC Sports users could truly maximise the full potential of their media rights. The AI platform also helped unlock new storytelling capabilities via highlights, such as localizing  and personalizing each video, to serve every type of fan with the content they most want to see, wherever in the world they may be.

From the thousands of highlights our clients generated across an exhilarating season, we decided to dive deeper and learn about which moments, players, and teams were deemed the most highlight-worthy, as well as giving the context behind these.

The title race was a fierce and lengthy battle between Manchester City and Liverpool. Although City spent 168 days atop the Premier League in 2021-22, compared to just 11 for closest challengers Liverpool, a league champion was not crowned until a frantic final day, with City needing three goals in five minutes in the closing stages of their last league game in order to pip Liverpool to the title at the season’s dying moments. The intense competition between these two throughout the season was reflected in the number of highlights generated per team.

With chasers Liverpool’s enthralling season unfolding as it did, fans simply couldn’t get enough of the action, meaning they finished as the team with the most highlights generated with 1,676! Eventual title winners Manchester City’s equally enticing season garnered plenty of attention, finishing with the 3rd most highlights with 1,638.

It was Manchester United who found themselves sandwiched between the two title challengers as the team with the second most highlights created about them. United’s season was turbulent at times, with their state of play, as well as going through two managers across the course of the season, helping make for some must see moments, both good and bad. Thanks to their status as the Premier League’s  most successful team and one of the biggest global sporting superpowers, coupled with the presence of a sporting GOAT on their team, Cristiano Ronaldo, United’s highlights were highly sought after, making them the team with the second most highlights generated across the season with 1,659 highlights generated.

Liverpool’s title challenge putting them firmly in the spotlight meant two of the top 3 players with most highlights generated were attributed to them. Despite finishing as the 5th top goalscorer for the season, Sadio Mane topped the list. His constant creativity made him one of the most important players for the Reds, with 403 highlights attributed to him. With Mane recently departing to Bayern Munich it will be interesting to see who takes his place with the most highlights this coming season.

Super Sadio with a brilliant bicycle kick to get us back in the game 😍 #LIVNOR pic.twitter.com/wGG0EhRXuW

Joint-Golden Boot winner Mohammed Salah also finished joint-second with 389 highlights, despite scoring the most goals (23), and registering the most shots on target (60), across the 2021/22 season. Another stellar season from the Egyptian.

Tottenham’s Harry Kane tied with Salah, also registering 389 highlights. Somewhat surprisingly, Kane placed higher than his teammate Son Heung-Min, who along with Salah was awarded the Golden Boot for most goals scored in a season after equalling his 23 goals. However, Kane’s reputation as one of the sport’s best strikers, as well as his 17 goals and 55 shots on target, the second most registered, explains his high position for highlights generated from individual players.

Another great season for one of our own 👏

Games of the Season

Unsurprisingly, the single game with most highlights generated across the season was the 9 goal thriller between Manchester City and Leicester, with the eventual league winners triumphing 6-3 over the 2015/16 champions. The 6 goals from 5 different goalscorers for City, and the 3 goals from 3 different goalscorers for Leicester, meant there were many memorable moments for highlights to be generated from.

The best of the action from a breathless encounter at the Etihad! 🎥#ManCity pic.twitter.com/Jar7fzL0Dg

High scoring games also complete the list of top 3 games with most highlights generated. Manchester City again appear thanks to their 7-0 thrashing of Leeds United, with the goals in the dominant display coming from six different goalscorers.

Leeds’ 4-2 loss to Manchester United rounds out the list. The historic rivalry between Leeds and the red half of Manchester, coupled with the exhilarating game that unfolded between the sides, with United clawing back to win after giving up a 2 goal lead, makes it no shock to see the game placing 3rd for highlights generated.

A stunning solo-goal in the most highly anticipated game all season sees Mohammed Salah take top spot for goal with the most highlights generated. The April clash between Liverpool and Manchester City was eagerly awaited and heavily promoted, with the winner taking top spot in the league with only 7 games to be left afterwards. In the 75th minute with the game tied 1-1, Salah’s moment of brilliance saw him weave around the City defenders before placing the ball calmly in the back of the net. The game ultimately finished 2-2, and the title race rolled on. The goal went on to be awarded Premier League Goal of the Season.

.@MoSalah has won the @PremierLeague Goal of the Season award.

Taking second place for goals with most highlights generated is Conor Gallagher’s stunning strike against Everton. Gallagher rose to prominence in the 2021/22 season, with the Chelsea loanee breaking into the England national team thanks to his high level performances for Crystal Palace. Along with Gallagher’s rising stock, there were eyes on Everton as early as December when the game took place, with the Toffees looking like possible relegation candidates due to their string of poor performances. With fans from 3 clubs (Palace, Everton, and his parent club Chelsea) closely watching Gallagher for the game, along with the stupendous strike, it’s no surprise to see this highlight so sought after.

Conor Gallagher put it on a postage stamp 💥#CPFC pic.twitter.com/BmhDyMsWGc

Third on the list is Mateo Kovacic, whose sublime volley in the clash between 2nd placed Liverpool and 3rd placed Chelsea was also nominated for Goal of the Season alongside Salah. The reigning Champions League winners were able to hold title-chasing Liverpool to a 2-2 draw at the start of the new year. As with every ‘top 6’ clash, the interest and intrigue amongst fans is at a higher level than for a regular game. This, coupled with a truly highlight-worthy goal, makes it clear to see why highlights of Kovacic’s effort were in high demand.

Cristiano Ronaldo has created many moments of brilliance across his illustrious career, and the 2021/22 Premier League season was no different. Ronaldo’s sublime match-winning free kick, scored in a game where Manchester United found themselves tied with last-placed Norwich, was the free kick that drew the most attention across the season. Alongside the phenomenal set piece, Ronaldo’s reputation as one of the greatest soccer players of all time, as well as his huge global brand and status as the most followed sportsperson worldwide, means it’s understandable to see this free kick place top for number of highlights generated across WSC Sports’ clients.

Save of the Season

As the weeks went on, the possibility of Everton playing in the second tier of English football for the first time since 1954 looked increasingly realistic. Jordan Pickford’s heroics displayed during the game against Chelsea to secure a 1-0 win can now be looked back at as one of the turning points towards the survival of this historic club in the top division. While Pickford’s entire clean-sheet performance can be admired, his memorable quick-reflex save place as the top save for highlights generated, and went on to win the Premier League Save of the Season Award.

So there you have it, a comprehensive breakdown of the moments deemed most highlight-worthy by our global clients from the 2021/22 Premier League season. We’re thrilled to play a part in how the story of a season is told by rights holders through short-form content and we simply can’t wait for the new season to kick off!

WSC Sports automates the creation and distribution of highlights for over 250 leagues and broadcast partners across the globe, including the English FA, Serie A, Bundesliga, Real Madrid, NBA, ESPN, YouTubeTV and many more.