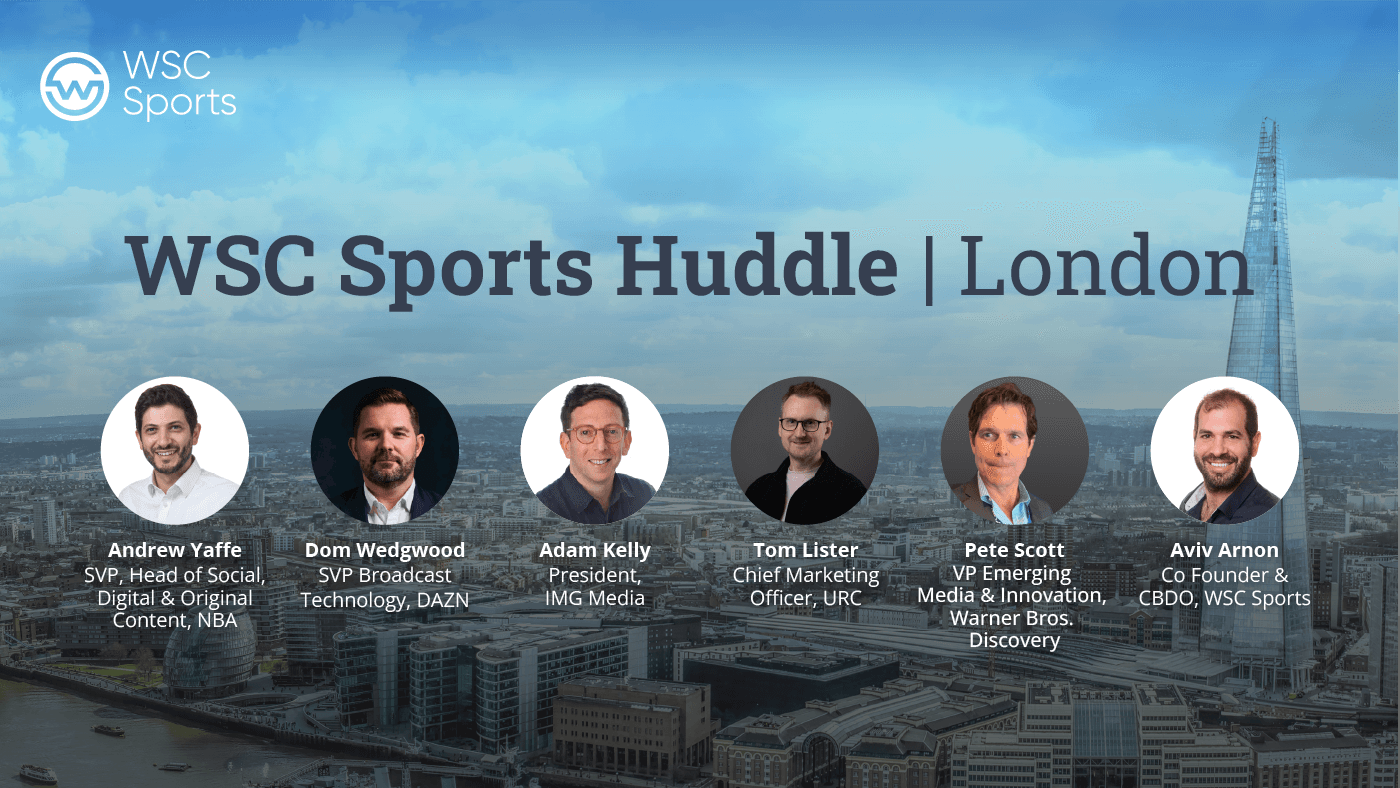 The atmosphere inside the Shard’s Shangri-la Hotel couldn’t have been more lively as some of the biggest brands in sports gathered to talk about digital strategies, new technologies and how they’re revolutionizing the way fans all over the world consume sports content.

Current clients of WSC Sports and high-level executives from the NBA, DAZN, IMG, Warner Media and United Rugby Championship, discussed at-length how they’re utilizing WSC Sports’ platform, as well as other technologies to push their brands forward in the digital age.

Over the course of the event, some key ideas and themes emerged. Here’s a handful of highlights that we want to share for those who couldn’t make it…

The NBA has been at the vanguard when adapting to changing consumer habits and embracing new technologies, so it was a unique experience to hear from the league’s SVP, Head of Social, Digital and Original Content, Andrew Yaffe.

Kicking off the afternoon as the first speaker, Yaffe provided exclusive insights on one of the league’s most anticipated projects—the new NBA app which launched only weeks prior to the event. Yaffe and his team set out to reinvent the fan experience on the new app by delivering a user experience reminiscent of social media with hyper-personalized content and vertically-oriented video.

With tens of millions of NBA fans all over the world, it’s no surprise that when it comes to content, no two fans want to see the exact same thing. Some might want more of their favorite player or team; others might be interested in NBA fantasy leagues or off-court fashion. WSC Sports’ technology makes it possible for the NBA to automatically create tailored content at scale, across multiple platforms, to serve different types of fans around the world with the content they most want to see.

The need for rights owners to create sports content in vertical format is the result of two leading factors—the first is an increase in content consumption on mobile devices (Yaffe cited a huge increase in users watching video on their phones over the course of the 2021-22 season), and the second is simply a better technological fit. One of WSC Sports’ most impactful features is the ability to automatically generate content in several different aspect ratios, including vertical, while always keeping the most interesting part of the footage in the center of the video, so no important action is lost to cropping.

The ‘Golden Age’ of Sports

Over the course of the afternoon, IMG Media President, Adam Kelly, mentioned  that we’re currently living in a ‘golden age’ of sport. The idea was supported by the fact that investment, consumption, and digital engagement are at an all time high. At the same time, the complexity of the market and all of the different players puts more pressure on rights holders to do more with their content. Competition for eyeballs is fierce from non-sporting companies like Netflix, social media and gaming companies. So how can rights holders get the most out of their sports content?

As CMO of one of the most popular rugby leagues in the world, Lister and his team have made it a huge priority to generate buzz around the league via short form content. He mentioned that real-time content is one of the leading contributors to fan engagement with his team noticing a significant increase in engagement when content is delivered in real time, something that would be impossible to do without the use of AI technology.

Aside from speed of delivery, Lister spoke of the need to use content in ways to deliver revolutionary user experiences for fans. New offerings such as ‘catch up to live’ on some platforms allows viewers, who may have missed the start of a game, to quickly catch up to live action through highlights of the key plays.

Doing Business in the ‘Attention Economy’

In a discussion focused on the future of broadcasting and streaming, WSC Sports’ Shaka Arnon moderated a discussion with Pete Scott, VP Emerging Media & Innovation at Warner Bros, Discovery; along with Dom Wedgwood, SVP of Broadcast Technology at DAZN.

Scott and Wedgwood agreed the biggest challenge rights holders face is how to provide an experience across all platforms and devices that’s seamless and based on the user’s preferences. Tangibly speaking, what might those experiences look like for us as consumers?

At the most basic level, the sheer amount of fans associated with sports teams and leagues offers a very interesting business proposition for potential partners. Kelly cited the recent deal that Amazon inked with the NFL to become the exclusive home of Thursday Night Football. Leading up to kickoff, he said that Amazon reported a record-breaking number of Prime subscriptions, registering hundreds of thousands of new sign ups. But once the customers are in the door, there’s so much more that rights holders can be doing to monetize their content.

Hyper-personalized ads tailored to individuals’ interests are upon us, so expect to see a lot more of them on your smart TV in the future. Depending on what you’re interested in, you could receive push notifications to place a bet, purchase a jersey, or buy an NFT of a memorable sports moment, and these are just a few examples.

The trick will be how to strike the perfect balance between effective monetization efforts and providing a good experience for the fans. New technologies will enable rights holders to put the fans first, not the other way around.