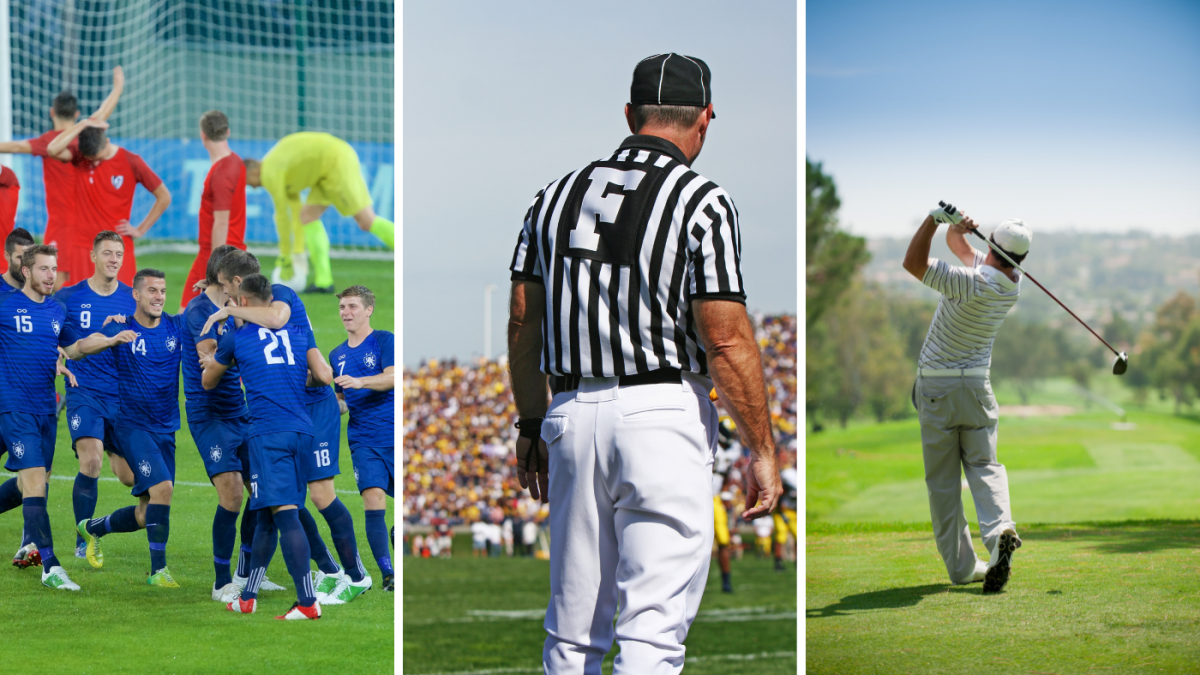 Is there anything better than a month full of sporting action? Of course not! Well that’s exactly what November had in store for us. Here’s the best sports highlights from a month that was full of trick shots and tributes. Let’s jump right in…

Shot of the tournament? Yes. Highlight of the year? Maybe. It’s certainly our highlight of the month and it goes to, you guessed, it Jon Rahm’s incredible Master’s hole-in-one…

A few hundred thousand of those are from us watching it on repeat! 🔁

Dustin Johnson took the Masters by storm. He finished at 20-under par, breaking the Masters scoring record and tied the major championship record. Reaching and realising that he’d achieved his childhood dream brought the emotion flooding out of the new world number 1. The commentator at the end of the clip summed it up beautifully… 👏

The moment he won it.

3) Bundesliga Goal of the Season Contender ⚽

This one is pretty much self explanatory. A simply wonderfully executed scorpion kick.

In a league where Bayern Munich and Borussia Dortmund seem to always grab the headlines this put a nice spotlight on Borussia Mönchengladbach for a change. Too bad for them they got nothing out of the game except for the stunning goal.

They may not have won the game but this #Scorpion kick was the pick of the goals. Unbelievable! 🦂#Lazaro #Bundesliga @valentinolazaro pic.twitter.com/JQe51qoGV7

If there’s one sport than American’s really love its College Football and there’s a ton of this still to come in December . Here’s one incredible play that is enjoyable to watch for so many reasons…

It’s funny how one of the most amazing plays you’ll likely ever see also looks like a game of hot potato! 🥔🔥pic.twitter.com/R4BBXEspkJ

Unfortunately it was controversially ruled out for an illegal forward pass. 🤦‍♂️ Did you spot it? 🤔

Things like this don’t normally happen, in fact Argentina had never beaten New Zealand in a competitive rugby match…but this is 2020 and anything is possible!

The All Blacks got their revenge for the shock defeat later in the month in emphatic style beating Los Pumas 38–0.

Sadly we move on from an Argentinian triumph to the devastating news of Diego Maradona’s death. Argentina lost a hero and the world lost a legend and global football icon.

There was an overwhelming response from the sports world with tributes pouring in for “El Pibe de Oro” (“The Golden Boy”) but one perhaps caught the eyes of more than the others. That was from compatriot Lionel Messi…

Not only does he wear the same number, play for one of the same teams and carry the same weight of being recognised as the G.O.A.T. but the goal he scored was reminiscent of Maradona himself. The perfect tribute. 👏

Oh and Antoine Griezmann’s goal is worth a second look too!

Major League Soccer’s playoffs are up next on our list and this highlight is perhaps one of the more unusual things you’ll likely see. Orlando City’s goalie was sent off for a second yellow card (thanks to VAR) for being off his line. Not being allowed to make a substitution, up stepped defender Rodrigo Schlegel (another Argentinian) with the hope of becoming a hero for Orlando. The rest we’ll leave up to you to watch and see what happens…

But what happens next is brilliant… 🧤#OrlandoCity #MLS #NYCFC #Gallese #VAR #Schlegel pic.twitter.com/nB2NrqmAai

We just love this. Raw emotion. The first thing he does is send a message to the kids. What a star. ⭐

Listen to that emotion as #LewisHamilton wins his 7th world title! 🏎️

“You can do it too man” 🙌#F1 #TurkishGPpic.twitter.com/bUYnIBMbHE

From a moment of ecstasy for Hamilton in Turkey, to a moment of near tragedy for all associated with F1 in Bahrain. French driver Romain Grosjean hit the barrier at 137mph and his car exploded into flames. The remarkable footage shows him emerging from the fire like a phoenix, incredibly escaping with minor injuries all things considered. The fact he came away from this is largely a testament to the F1’s safety procedures, specifically its halo driver crash-protection system, the fire retardant materials on the driver suit and the speed of the first responders.

We do warn you this was a very serious incident and the footage is not for the feint of heart.

We are so thankful that Romain Grosjean was able to walk away from this. We did not need a reminder of the bravery and brilliance of our drivers, marshals, and medical teams, nor of the advances in safety in our sport, but we truly got one today#BahrainGP 🇧🇭 #F1 pic.twitter.com/z8OeTU5Nem

A heart-stopping moment on Lap 1 in Bahrain

An update from Romain himself. Pleased to see you’re in good spirits! We hope you make a speedy recovery 🙏 pic.twitter.com/njnjjH4GBi

Managed to push the button to record. Again thank you for all the messages 🙏 pic.twitter.com/czgrZi0MOf

We’re all so happy to hear Romain is in great spirits and has now returned home from hospital. Credit to his amazing personality, positivity and all the medical staff involved. We can’t wait to see you back behind a wheel soon.

We’ll leave you with a series of simply stunning football catches. It was too hard to pick out one clear winner so we’ll just put them in chronological order for you, enjoy!

🤯Most amazing catch of the weekend award goes to… pic.twitter.com/RqS5qnQLjo

Oh and who can forget the bonus section!

I guarantee you’ve never seen anything like this before. Flares and fireworks lit up Croatian skies as fans from Torcida (Hajduk Split’s famous supporters group) celebrated the group’s 70th birthday. The unbelievable display even outdid the club’s 100th anniversary official celebrations back in 2011.

Amazing firework and flare display by Hajduk Split fans lighting up the entire city to celebrate their 70th birthday. 🤯pic.twitter.com/w4FeA7m6cn

There’s just one month to go until this crazy year is over! But if you thought sports were slowing down you can think again… 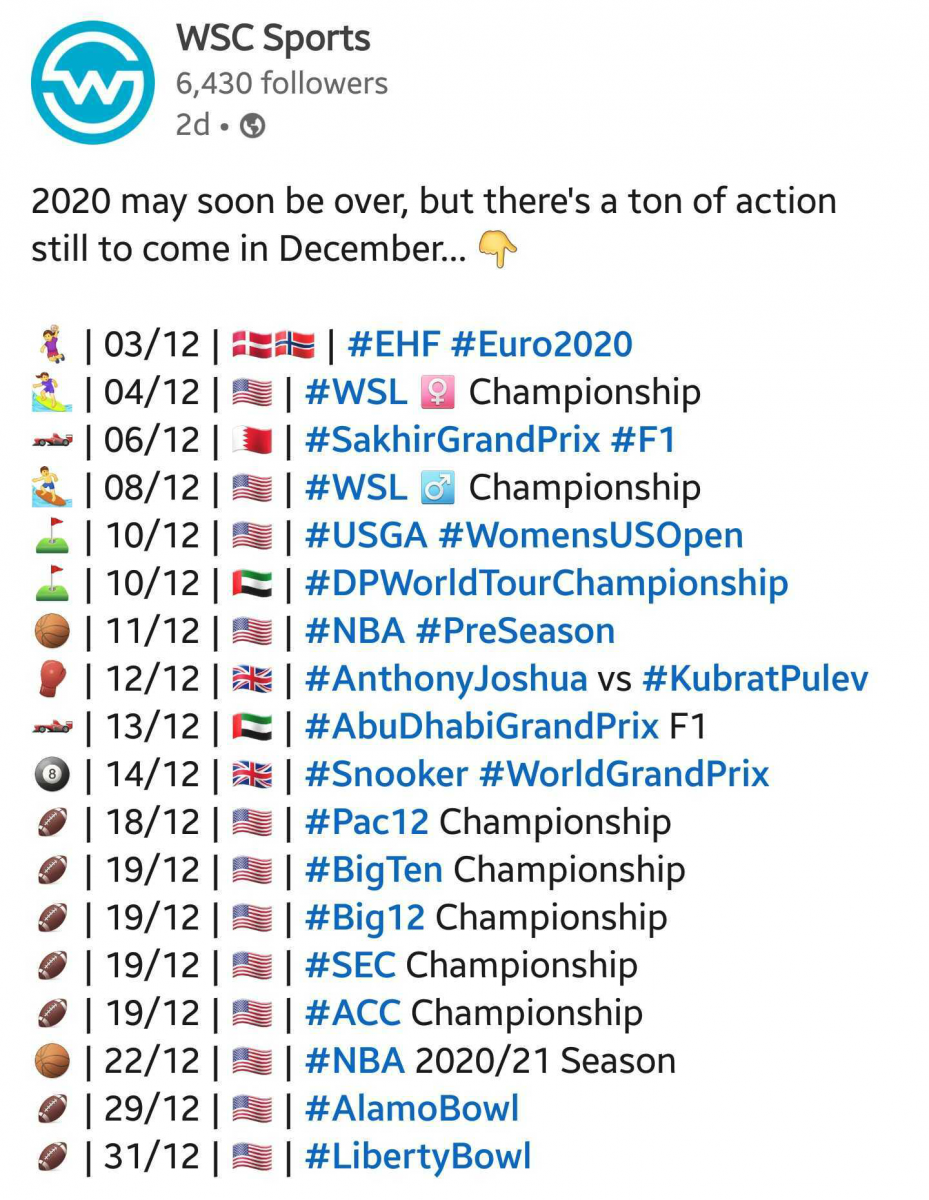 WSC Sports’ proprietary AI technology platform automates the creation of highlights for over 100 leagues and broadcast partners across the globe, which include the NHL, NBA, ESPN, YouTubeTV, FIBA, Eleven Sports, Nascar and Bleacher Report. WSC Sports enables partners to create a mass of highlights in real-time that can be distributed directly over social media and other digital channels, in addition to a wide range of innovative solutions to increase brand awareness, disrupt fan engagement & personalization and maximize monetization opportunities.