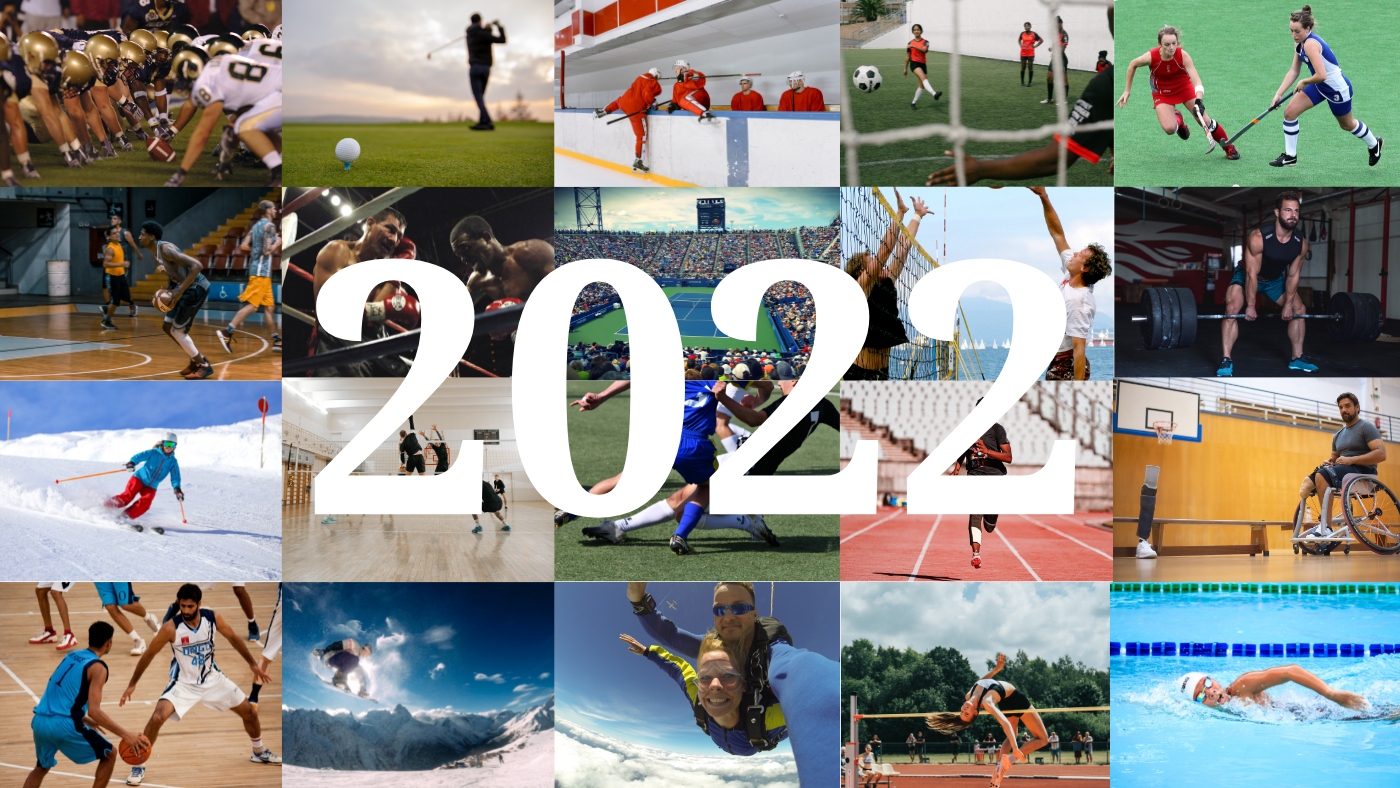 2022: Reliving the Best Sports Highlights From an Unforgettable Year

Last year, we helped our clients publish millions of highlights, literally. With so many to choose from, we tried to narrow down the year’s incredible moments for you to relive some of the excitement. Join us, as we remember 2022’s sporting calendar in all its glory.

The year got off to a great start for tennis star Rafael Nadal. In the final of the Australian Open in January, an epic battle lasting five hours and 24 minutes took place between Rafa and Daniil Medvedev. At the end of it, it was Rafa who came out on top, claiming his record 21st Grand Slam title. A moment of pure joy for the Spaniard as he elevated himself into the top spot for all-time major wins. While he did go on to finish 2022 with 22 Grand Slams after a further victory at the French Open, the moment he first broke the record makes for great watching.

February saw the culmination of the NFL season, with the Los Angeles Rams defeating the Cincinnati Bengals to clinch the biggest prize in US sports. It felt like a long time coming for star defensive end Aaron Donald. While he had been named to 8 Pro Bowls, voted as Defensive Player of the Year 3 times, and selected as a First Team All Pro 7 times, Donald lacked football’s greatest reward; a Super Bowl ring. Those dreams came true for Donald and the rest of the Rams in February, with LA’s star man clinching the game. Donald’s celebration showed just how happy he was to get that long sought after ring, immortalizing himself in NFL history.

A truly incredible comeback story, Christian Eriksen’s return to football was nothing short of miraculous. During a game for the Danish national team, a EURO match in June of 2021, Eriksen suffered a sudden collapse, requiring CPR treatment and defibrillation. Eriksen worked hard to regain full health, and was declared fit to play in 2022. In March, Eriksen returned to the fold of the Danish national team, coming off the bench as a substitute in a game vs the Netherlands. Not only was the crowd overjoyed to see Eriksen back to full strength, but he scored on his very first touch of the ball, in a very emotional moment for all of Denmark.

In April, golfing history was made, as Scottie Scheffler claimed victory at The Masters, his first ever win in a major tournament. It wasn’t smooth sailing for Scheffler on his way to winning the green jacket, however. While Scheffler looked to be in control during the early stages of the tournament, Rory McIlroy ramped up the pressure throughout, and by the final day sat just one stroke behind Scheffler in the standings. Ultimately McIlroy walked away empty handed, as Scheffler was able to push on and claim victory. This was all the more impressive, considering just eight weeks prior to the event, Scheffler had zero PGA Tour wins! Let’s look back at the winning moment.

May saw the dramatic conclusion to the 2021-22 English Premier League season. While the league’s final day is notorious for stirring up drama, the scenes that occurred this time around were like no other. At the start of the day, Manchester City found themselves atop the Premier League, closely followed by challengers Liverpool, who trailed by a single point. City knew that a win against Aston Villa would be enough to crown them champions of English football for a second straight year. However, things did not unfold as simply as they’d hoped. After conceding in the game’s 37th minute, things worsened in the second half as Aston Villa doubled their lead to 2-0. Stunningly, with 15 minutes to go, City kicked into gear scoring 3 goals in just 5 minutes and clinched the title title, crushing the hopes of all Liverpool fans, and sending the blue half of Manchester into wild celebrations. Check out the highlights here.

The Warriors walked away from June as NBA champions. However, the odds of another victory for the team from the Bay looked unlikely at the start of the season. After missing out on the playoffs in 2020, and failing to progress past the play-in games held to determine the last playoff qualifiers in 2021, the Warriors were able to overcome the doubters in 2022. Steph Curry starred throughout the six game series – minus one off-day where he went 0-9 on three pointers. His strong showing across the other five games was enough for him to be named MVP of the finals, and helped clinch the Warriors’ fourth NBA championship in eight seasons. Check out this moment of confidence from Curry during the finals, as well as the scenes of celebration in San Francisco during the victory parade that followed.

Steph knew it was good once Klay touched it 💦

Football finally came home this July thanks to England’s Lionnesses, as the finale of the Women’s EURO 2022 tournament saw England take on arch rival Germany. The game was dramatic and lengthy, finishing 1-1 in regulation and heading to extra time. In the 110th minute, Chloe Kelly fired in a close range shot, clinching the England Women their first ever major trophy. In fact, this was the first trophy won by either the England men or women since the famous 1966 World Cup final, where the men’s side also faced Germany at the old Wembley Stadium. Check out the scenes from inside the stadium! A night that will be remembered in England for a long time.

August saw the long awaited heavyweight rematch between Ukraine’s Oleksandr Usyk and England’s Anthony Joshua. After Usyk’s surprise victory in September 2021, Joshua faced a long wait to try and reclaim the belts he handed over. Unfortunately for Joshua, it was not to be, as Usyk proved too good yet again, winning in a split decision bout. The win brought much joy to Usyk’s native Ukraine. Have a listen to the reaction of the Ukrainian commentators after Usyk was crowned champion.

Tennis Legend Roger Federer’s waved farewell in September, signing off on an outstanding career, in which he won an immense 20 grand slam titles. Federer bowed out from the court with a final match, competing alongside his historic rival Rafa Nadal in a doubles game. After the game, we saw emotion from both Federer, as well as his former great rival Nadal. A touching moment for tennis fans everywhere, as we reflected on what Federer meant to the sport.

These two are the classiest most respectful men in the world of sports, a true embodiment of sportsmanship despite the competition ❤️❤️#ThankYouRoger #Nadal #RogerFederer #FedalForever #Federer pic.twitter.com/MqWU6v4k8K

A viral moment that will live on in sports highlights reels for years to come from NASCAR in October. Ross Chastain’s moves in the final stages on track at Martinsville caught the eyes of sports fans everywhere. With this being the penultimate race of the season, in which the four drivers with the most points across the season would be finalized and would determine who would compete in the Championship race, Chastain found himself placed in 10th, and knew a finish that low would wipe away his chances of competing for the trophy. Trying an unorthodox method seen only in racing video games, Chastain purposefully drove his car into the wall, using its curvature to catapult him from 10th to 5th place, and pushing him over the line, getting him enough points to partake in the deciding race. Incredible!

THE MOVE THAT SENDS ROSS CHASTAIN TO THE #CHAMPIONSHIP4! pic.twitter.com/67Ku712XZf

The Houston Astros claimed baseball glory in November, defeating the Philadelphia Phillies in the World Series Championship. After going 2-1 in the first 3 games of the finals, the Astros put on a dominant performance, winning 3 games in a row to finish 5-1, and hand them The Commissioner’s Trophy once more. This was the Astros’ second ever World Series victory, the first coming in 2017. Take a look back at the victorious scenes in Houston once more.

December saw the long awaited Qatar World Cup, as the final chapter was written in one of the greatest sporting stories of all time. Argentina’s Lionel Messi has for many years been considered one of the greatest soccer players of all time, with many ranking him first overall. Debate has raged on for years, however, due to Messi’s lack of a World Cup trophy. Having played in four World Cups prior, and at 35 years of age, the World Cup in December was Messi’s final chance to get his hands on the trophy he desired so greatly.

The tournament got off to a rocky start for Argentina, as underdogs Saudi Arabia defeated them in a shocking result. However, that didn’t phase Argentina, as they progressed past the group stage and all the way to the final, where they would face France. With the world’s eyes watching, a dramatic game unfolded. After a Messi penalty and a Di Maria goal in the first half, Argentina looked to be in control. This was indeed the case, up until the 80th minute, when an  Mbappé penalty gave hope to France, before the Frenchman scored again just one minute later. The drama continued into extra time, with another goal from Messi seemingly sealing the win for Argentina, before Mbappé again clawed France back into the game. And so, the greatest prize in sport was to be decided on penalties. After some heroics from Argentina’s goalkeeper Emi Martinez, the game was over. Argentina was crowned world champions for the third time in their history, and Messi had reached the pinnacle of soccer. With the World Cup trophy added to his already illustrious accolades, the debate has surely been ended on who’s the greatest ever. A true pleasure to watch, see the victorious scenes from the game and from the streets of Argentina.

We’re sure 2022 will go down as one of the greatest years in sports history. Can’t wait to see what 2023 brings!