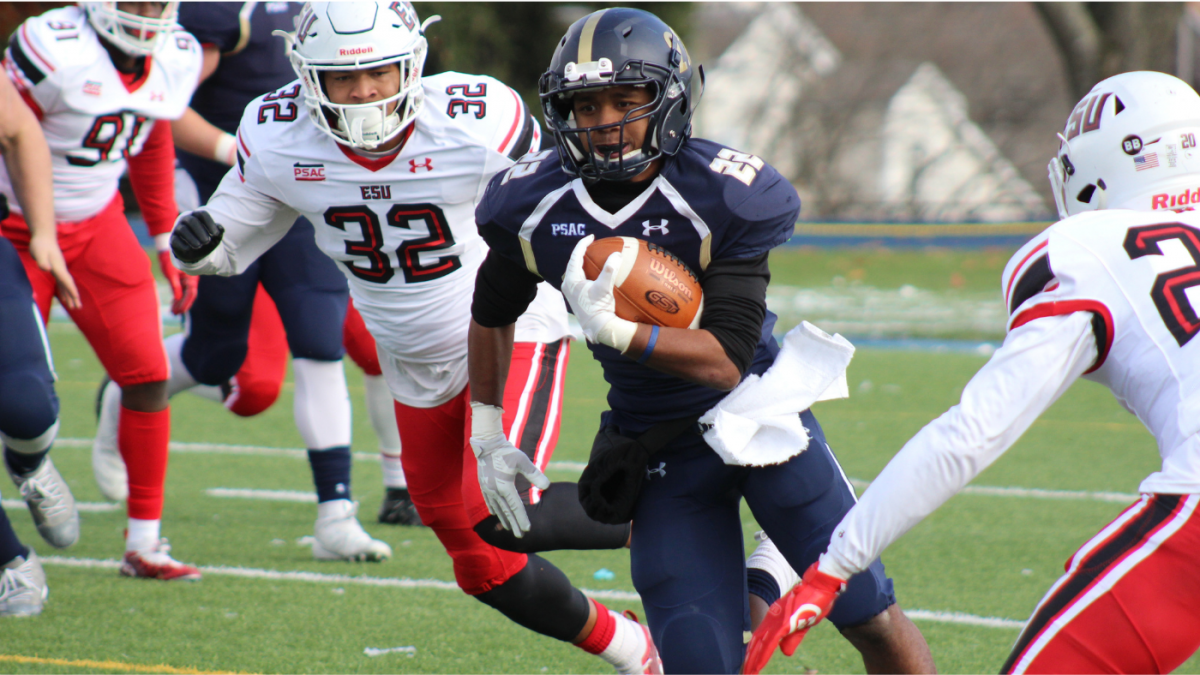 There was no better way to start the new year than a month filled with amazing sports highlights. This month’s special football edition (American football, sorry to all you soccer fans) featured the end of the NFL season and the always exciting playoffs. Don’t worry though, I sprinkled in some other sports for you guys as well. With tons of highlights to get through in this jam-packed month, let’s get straight into my top 11.

1. Going Out with a Bang

To start off the month, we were treated with one of the most memorable ends to the NFL season.

The first game with playoff implications resulted in the Steelers eliminating the Ravens from playoff contention and claiming a spot for themselves. Check out the game-winning play.

CHRIS BOSWELL FOR THE WIN IN OVERTIME! #HereWeGo pic.twitter.com/07xZL67eiK

Finally healthy, the 49ers also earned a playoff spot in their win against the Rams following this game-clinching interception.

The last open playoff spot went to the Raiders after they defeated and eliminated the Chargers. The Chargers refused to go out without a fight though and gave us one of the craziest endings to a game in recent memory.

THE @CHARGERS TIE IT WITH NO TIME LEFT.

Despite the Chargers’ efforts, however, the Raiders managed to drive down the field late in overtime to win the game.

DANIEL CARLSON FOR THE WIN.

The Bengals were the first team to advance to the next round, ending a 31-year playoff win drought, after eliminating the Raiders on this last play of the game.

The 49ers also ended the Cowboys’ season after this controversial last play call by the Cowboys, giving them no time to even attempt a game-winning touchdown. They will face the number one seed Packers in the next round of the playoffs.

The rest of the games from Wild Card Weekend ended in blowouts across the board.

In a perfect offensive output, scoring a touchdown on every drive for the first time in NFL history, the Bills dominated the Patriots.

Five touchdowns against the No. 2 scoring defense.

While the Bills were putting on a show, the Buccaneers demolished the Eagles, bringing Brady’s playoff record to an insane 35-11. Rob Gronkowski also broke the record for most touchdowns by a tight end in playoff history on this catch.

.@RobGronkowski‘s 15th career postseason TD, most ever by a TE! #SuperWildCard | #GoBucs

Patrick Mahomes exploded as well with a mind-boggling five touchdowns thrown in under 11 minutes as he sent the Steelers home and Big Ben Roethlisberger into retirement. The Chiefs are now tasked with beating the Bills in the next round.

For the last time. pic.twitter.com/eVYdbsbbme

In the Rams rout of the Cardinals, Matthew Stafford picked up his first playoff victory of his 13-year career, while Odell Beckham Jr. also caught his first-ever postseason touchdown and became the first player in playoff history to record a 30-yard reception and 30-yard completion in the same game. The Rams are now set on defeating Tom Brady and the Buccaneers in the Divisional Round and preventing them from winning back-to-back Super Bowls.

We were also given possibly the greatest playoff weekend ever in the Divisional Round with the defeat of both number one seeds, every game ending on a game-winning play, and an average margin of victory of 3.8 points.

In the first game, the Bengals defeated the top-seeded Titans on this game-winning field goal despite the Titans playoff record nine sacks to move onto the conference championship game.

In Aaron Rodgers’s possible last game as a Packer, the top-seeded Packers were the next team to be sent home after 49ers’ kicker Robbie Gould’s walk-off field goal (Gould still hasn’t missed a kick in his playoff career).

As called on 49ers radio: pic.twitter.com/0tJX2w3pjY

The Rams also knocked off Brady and the Buccaneers despite the Bucs 24 point comeback. Matthew Stafford would not let anyone stop him from his first Super Bowl as he led the Rams down the field with help from Cooper Kupp, setting Mat Gay up for this game-winning field goal. The Rams now look to win their next game against the 49ers to advance to the Super Bowl.

MATT GAY FOR THE WIN! pic.twitter.com/AQBU54oVhD

To end the Divisional Round, the Bills and Chiefs gave us an offensive onslaught, with both Patrick Mahomes and Josh Allen combining for 25 points in the last two minutes of the fourth quarter and overtime alone! After the Bills took the lead with only 13 seconds left on the clock, Mahomes took the Chiefs down the field in just two plays to tie the game and send it to overtime, where he quickly ended the game on this Travis Kelce touchdown. The Chiefs will now face the Bengals to fight for a spot in the Super Bowl.

THIS VIEW OF THE WINNER. 🤯 pic.twitter.com/c7CntozVF0

With a Super Bowl berth now on the line, all remaining teams played their hearts out and the games certainly didn’t disappoint.

Up 18 in the third quarter of the Chiefs Bengals game, the Chiefs looked to have all but won the game, but Joe Burrow and the Bengals had other plans, rallying to have the largest comeback in conference championship history. They won the game on this field goal in overtime, making the Super Bowl for the first time since 1989.

EVAN MCPHERSON SENDS THE BENGALS TO THE SUPER BOWL ‼️

Last year was the first time in history that the host of the Super Bowl played in the game. The Rams will extend that record to two years in a row after beating the 49ers 20-17 in a fourth-quarter rally to also make the Super Bowl thanks to this dagger.

THE PRESSURE! THE PICK!

Good luck to both the Bengals and the Rams in what looks to be an incredible Super Bowl.

Watching this on repeat. #GoDawgs pic.twitter.com/lQP2ndVGai

Let’s shift gears to a different type of football as Tottenham saw themselves down 2-1 with added time ticking away. What happened next was unbelievable as Steven Bergwijn scored two goals, one in the 95th minute and one in the 97th, to will Tottenham past Leicester City. With this win, Tottenham keeps their hopes of competing in the coveted Champions League alive as they inch closer to finishing top four in the Premier League. Sensational goals in a sensational game.

For the first time in the history of our monthly sports highlights, Klay Thompson is making an appearance as January also featured his return from an ACL injury he suffered in the NBA Finals nearly two and a half years ago. Thompson finally made his long-awaited return to the basketball court, and it could not have been more special as he put on a show, reminding everyone who he is and putting the NBA on notice. Watch out; it looks like we have another true contender.

KLAY THOMPSON KNOCKS DOWN HIS FIRST SHOT ATTEMPT IN OVER 2 YEARS! pic.twitter.com/Lwc3pIpm2J

KLAY WITH THE CROSS AND THE POSTER 🤯

In women’s basketball, Kansas State center Ayoka Lee put up a D1 record 61 points in just three quarters. When she was subbed out, she had the same amount of points as the opposing team’s total!! Watch her record-setting points and the team’s wild locker room celebration.

Ayoka Lee had an unstoppable performance today on her way to scoring an NCAA record-setting 61 points. #KStateWBB x @Yokie50 pic.twitter.com/yjmSisyiei

At the beginning of the month, hockey fans were treated to the NHL Winter Classic, the first of two outdoor NHL games for the year. This year’s edition of the game saw the St. Louis Blues beat the Minnesota Wild 6-4 as they faced off in negative 5.7-degree weather, the coldest game in NHL history. Check out the freezing weather the players walked into and this amazing tour of the beautiful stadium.

The Blues are walking out like this in -6 degree weather 😳

Absolute 🔥 this drone tour is❕

Watch the 2022 NHL #WinterClassic TODAY at 7p ET on @NHL_On_TNT and @Sportsnet!

One of the more inspiring sports highlights of the month featured a 37-year-old mother of two returning to running to break the women’s marathon record, clocking a time of 2:19:12. Give a listen to her amazing story as she continues to defy Father Time…or should I say Mother Time.

This 37-year-old mother of two thought her running career was over. But after taking seven years off, Keira D’Amato came back to break the American marathon record. https://t.co/7bGUH4Z1bg pic.twitter.com/BAjktGhFoR

In such a packed month of sports highlights, it would be a shame to omit the Clippers’ insane comeback against the Wizards. Before the end of the first half, the Clippers were trailing by 35 points before mounting a comeback and cutting the lead to seven with 20 seconds left to go. Teams that found themselves in this position were 1-16,239 before this game, but Luke Kennard did the impossible, scoring seven points in the final nine seconds, including this game-winning four-point play.

The bonus section to this month’s edition of sports highlights is dedicated to Rafael Nadal and Ash Barty for winning the men’s and women’s Australian Open.

After being down two sets against Daniil Medvedev, Nadal staged a comeback, winning his 21st Grand Slam title, the most in men’s tennis history.

Barty also became the first Australian to win her home major since 1978 with her defeat of Danielle Collins on this beautiful hit.

If you enjoyed this sports highlights roundup check out the best bits from December.