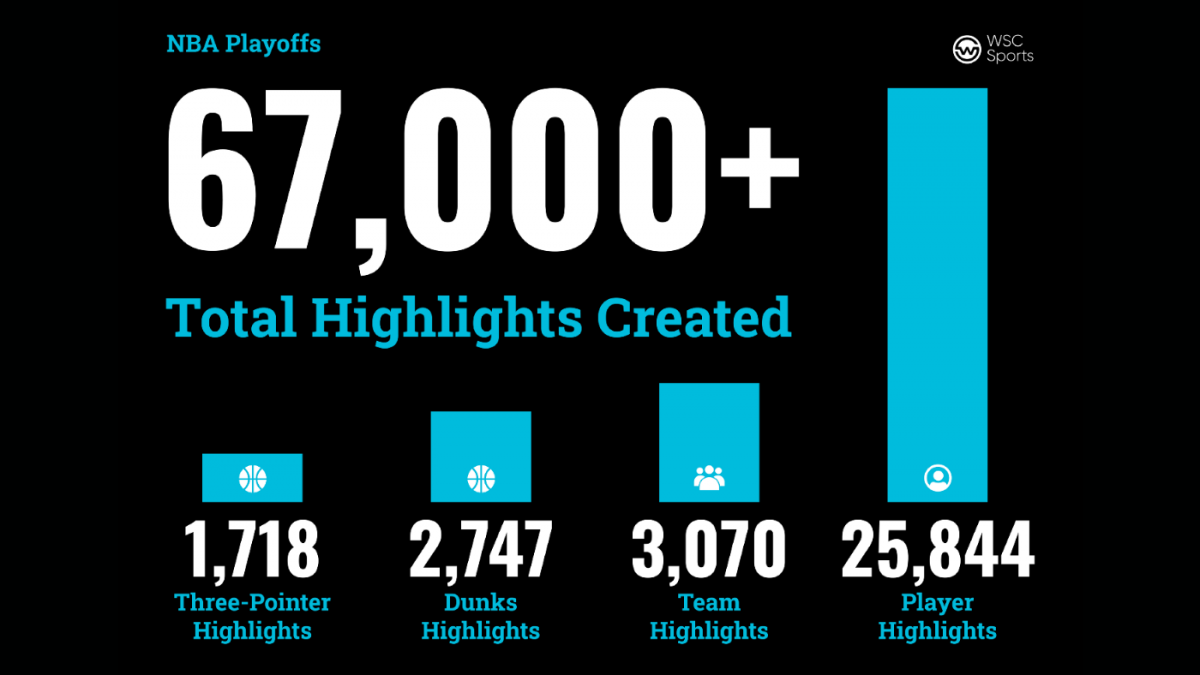 WSC Sports: The Automagical Highlights Behind the NBA Playoffs

This year’s NBA Playoffs will be remembered for many reasons. Many of which are due to the unprecedented circumstances surrounding the games: the bubble, no fans and games every other night. On the court, however, we’re going to remember the highlights and oh boy there were a lot of them! (67,290 to be exact, based on usage data across WSC Sports’ clients).

67,000+ videos may seem a lot, but not necessarily when you consider the needs and desires of modern sports fans. Gone are the days of media rights holders producing a ‘one-size-fits-all’ video highlight for all of their digital publish points. Fans today demand personalised sports content, for whichever device or platform they may be using, and they want it as close to real time as possible.

Fans on Twitter will be looking for short-form ‘snackable’ clips, whereas those on YouTube will likely be looking for longer-form highlights, and those checking their Instagram stories will need video highlights in vertical. This level of customisation, at such a huge scale that’s not been seen before, is being fuelled by WSC Sports’ ‘ Automagical’ AI and Machine Learning technology. 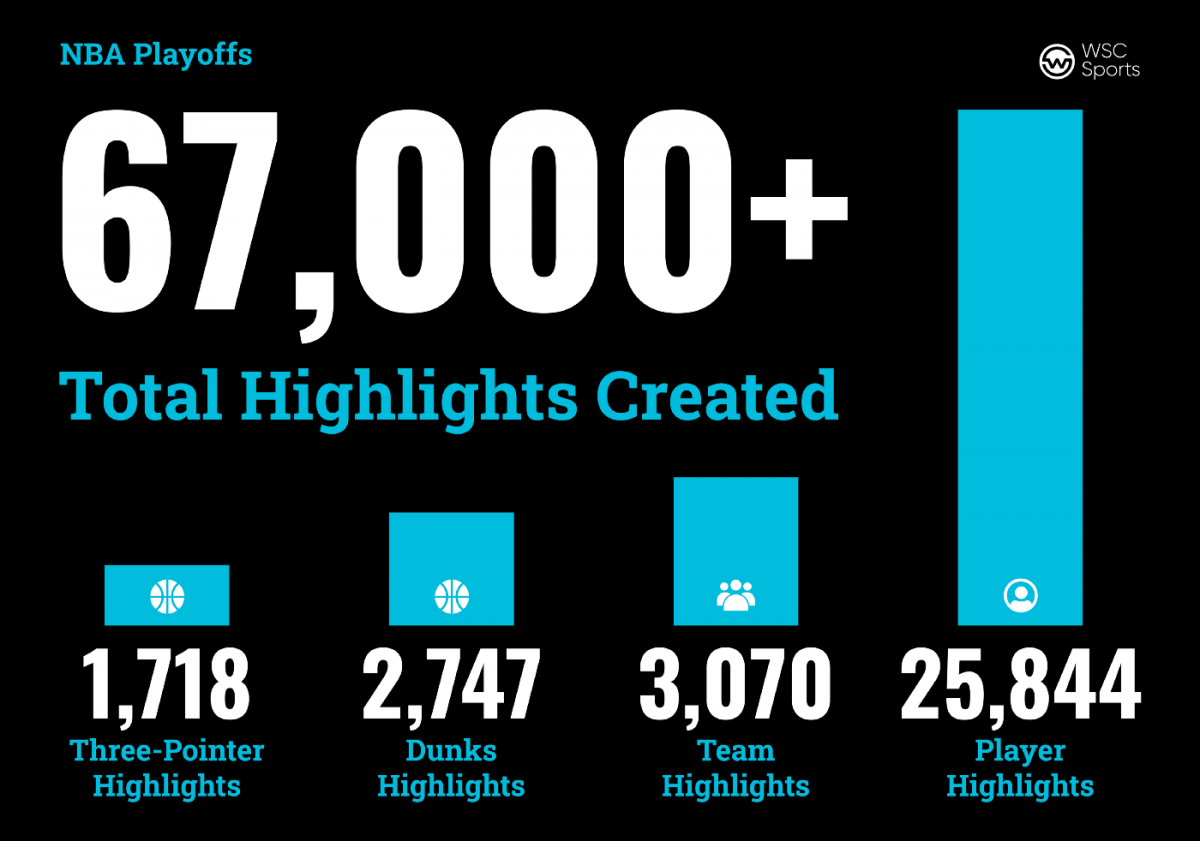 Throughout the historic 2020 NBA Playoffs and Finals, WSC Sports armed editors at over 30 of its clients worldwide with the ability to automatically create a mass of professionally edited highlight clips to tell the story of each and every game, from each and every play, maximising the full potential of their media rights, while satisfying the cravings of basketball fans.

WSC Sports analyzed all of the automatic highlight clips its platform generated to uncover the players, teams and games that were the most highlight-reel worthy, which included 25,844 highlights of players, 2,747 highlights of dunks and 1,718 three-pointers.

In total, 3,070 team highlight videos were automatically created. Champions Los Angeles Lakers, as you might expect, had the most highlights created about them, besting their Finals counterpart Miami Heat by 22%. The Denver Nuggets came in third with 22% fewer highlights than Miami. 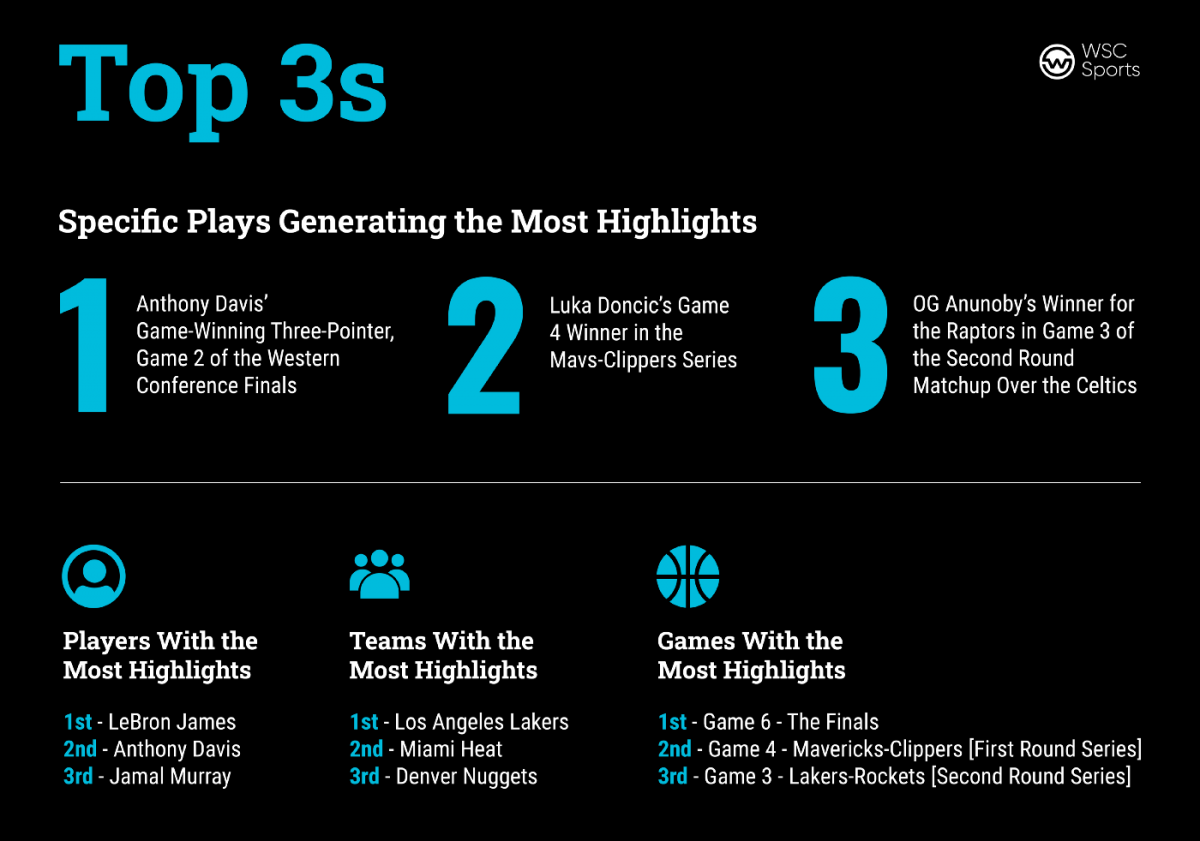 The NBA Finals’ MVP and king of the bubble, LeBron James, also reigned supreme when it came to highlights — he had 29% more of them than his teammate Anthony Davis, who finished second in this category. Nuggets breakout star Jamal Murray came in third, trailing Davis with 16% fewer clips.

The games with the most highlight videos were the Lakers’ title-clinching Game 6 of the Finals, followed by Game 4 of the Mavericks-Clippers first-round matchup and Game 3 of the Lakers-Rockets second-round series.

Buzzer-beaters accounted for the top-three singular moments of the NBA playoffs in terms of highlight clips automatically created. They were, in order:

1. Davis’ game-winning three-pointer in Game 2 of the Western Conference Finals versus the Nuggets was THE ultimate highlight.

2. Followed by Luka Doncic’s Game 4 winner in the Mavs-Clippers series.

3. Raptors’ OG Anunoby’s winner in Game 3 of its second-round matchup over the Celtics came in third.

“OG ANUNOBY AT THE BUZZER!”

The shot and the @Raptors reax from @OAnunoby’s #TissotBuzzerBeater in Game 3!

How WSC Sports Gets It Done

WSC Sports’ platform generates personalized sports videos for every digital platform and every sports fan — automatically and in real-time. 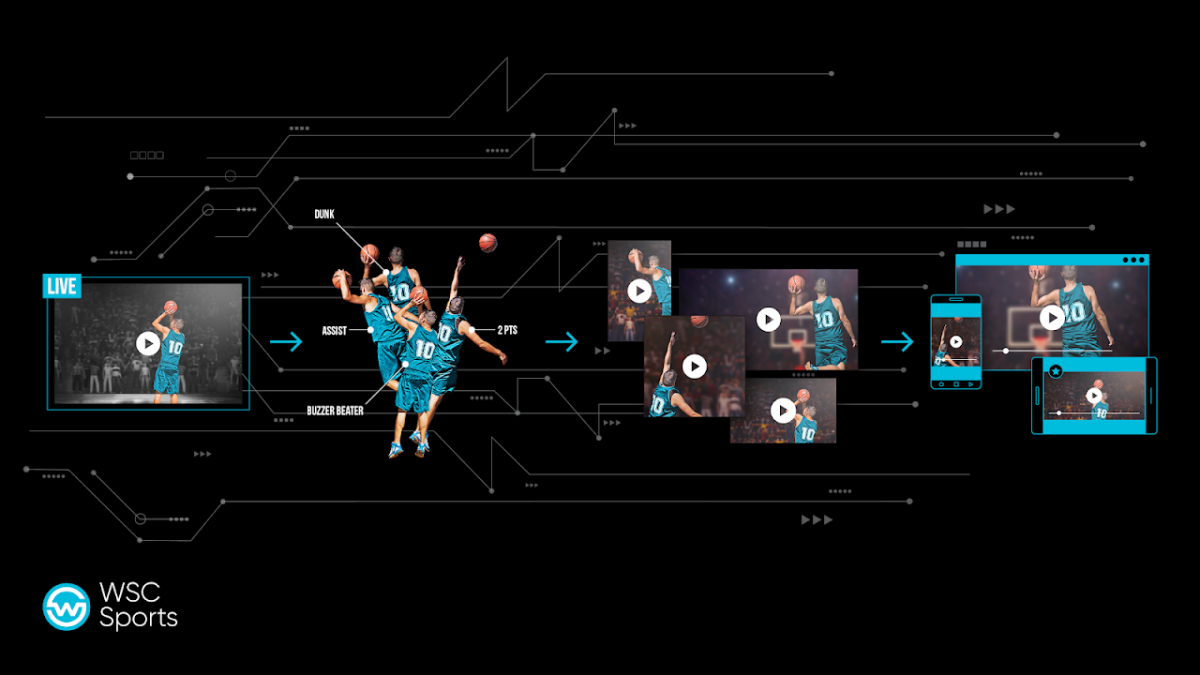 Currently being used by leading media rights owners such as NBA, ESPN, FIBA, NASCAR, Discovery, Bleacher Report, and many others, WSC Sports’ platform utilizes advanced AI and Machine Learning technologies to analyze live sports broadcasts, identify each and every event that occurs in the game, create customized short-form video content and publish to any digital destination. This enables partners to instantly generate and distribute professionally edited personalized clips and videos on a large scale, to engage audiences and maximize video monetization opportunities.

The power of WSC Sports’ platform offers unparalleled content customization, automatically creating videos that vary in length, audio (commentator language), format (square, vertical, 16:9) and graphics packaging, enabling clients to make the perfect video for every platform, telling the exact story they want to tell, for each and every type of fan.