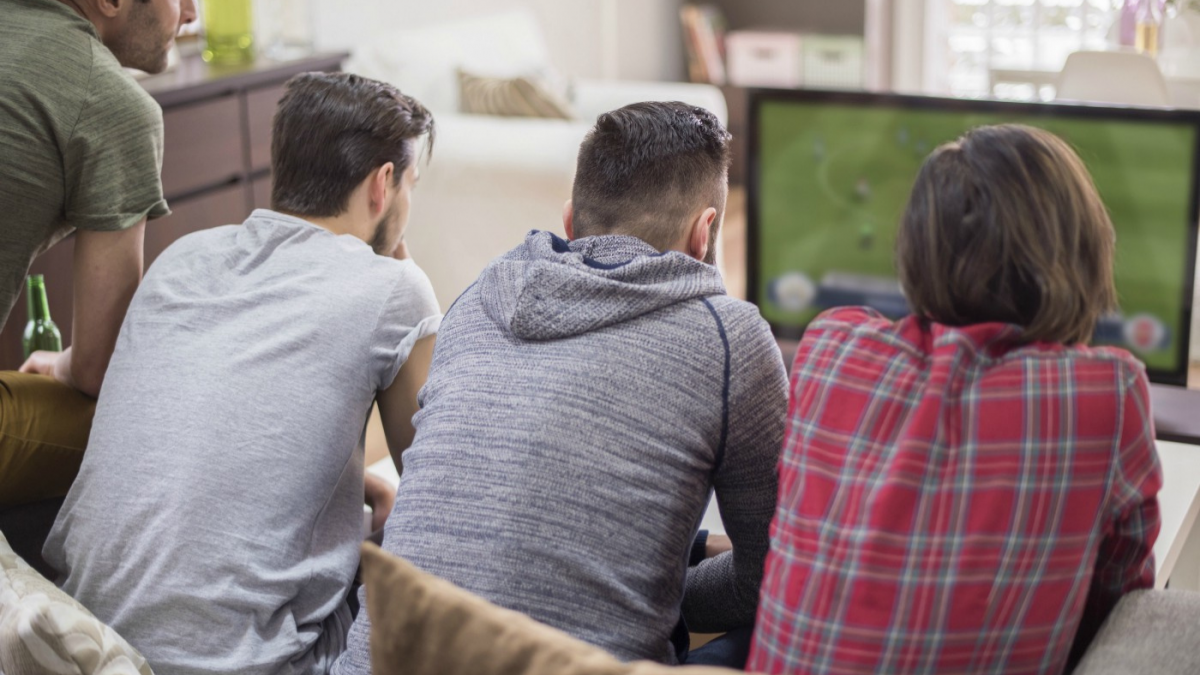 What the Fans Want: 3 Polls to Help Better-Understand Sports Fans During Lockdown

We recently ran a few polls across our social media channels to get a better understanding of fan sentiment during the global sport hiatus. What’s important to them; if they’ve liked the new avenues their teams/leagues have explored; how they’re adapting to the new tech being trialed as sports begin to return, that sort of thing.

We had a good response from our followers, who comprise mainly of fans from all types of sports and sports-tech professionals, so let’s jump right in and see how they voted.

The first poll we ran was back in mid-April. We wanted to start off by gauging if fans would rather wait until they can physically return themselves to stadiums to watch their team, before leagues start to return, or if they simply can’t wait and are craving their beloved sport so much that they needed it back ASAP, but behind closed doors… 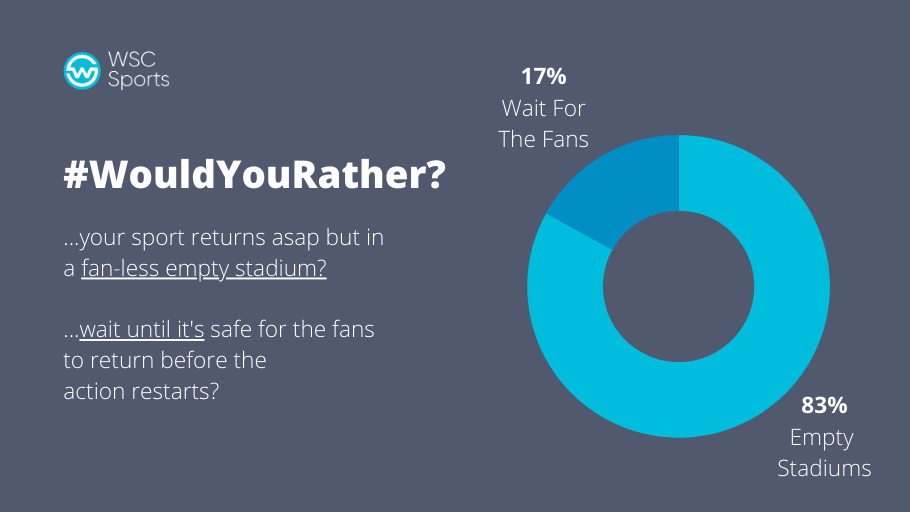 As you can see fans were clearly going stir-crazy stuck at home, and in real need of the return of their favorite sport. This is reflected in the 83% landslide poll result to bring sports back in empty stadiums.

It won’t be the same without you — but we’re finally returning home ❤️#MUFC #UnitedAtHome pic.twitter.com/VqJQMFTDVI

In times of crisis many of us turn to sport for a much needed distraction and release. From the blow of the first whistle at kickoff, to the wave of the checkered flag, or the sound of the final buzzer, whatever game you love, sports let you get lost in the action. So it’s no wonder the votes went that way, we all needed something to cling onto and look forward to, to help us through the lockdown.

One other emerging sports-tech sector that has really taken off during the coronavirus period is Esports. They’ve been very successfully used to keep fans engaged and entertained during lockdown, but we wanted to know what happens to Esports when the action returns? Would fans watch these when they can watch the real thing? We asked that very question in early May… 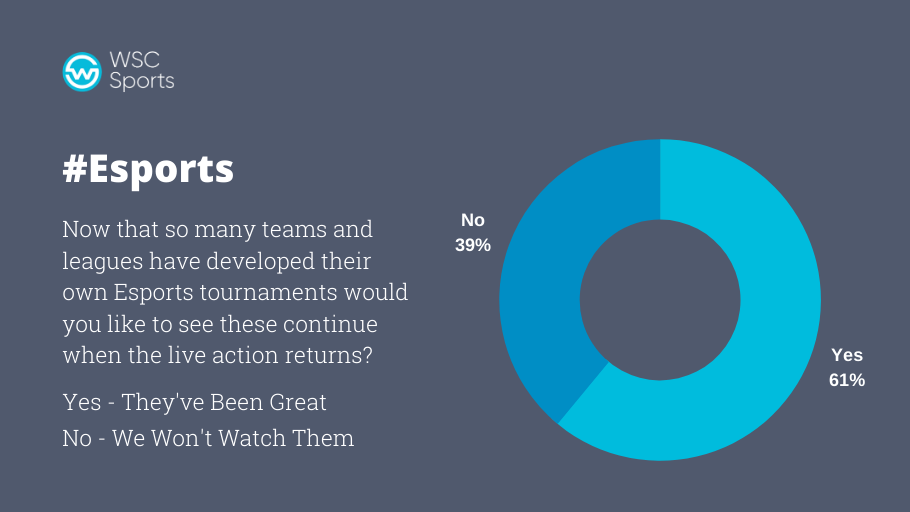 Esports have been rapidly growing in popularity in recent years and thanks to the role they played during the lockdown period we expect that popularity to continue to rise and for them to play a bigger role in the sports-tech landscape. This is backed up with 61% of fans who voted that they’d like to see their teams/leagues continue Esports tournaments when the action returns.

The sport-tech crossover on everyone’s lips right now is the new technology being trialed as sports make a comeback. Leagues and broadcasters are experimenting with artificial fan noise and imagery to help bring atmosphere to empty stadiums. Most broadcasters now offer the option to watch a game with artificial noises added or without.

Miss the sound of fans in the stadium? On Saturday, you can watch @Bundesliga_EN action with crowd noise!

Watch @FCBayernEN vs. @f95 with the sounds of fans on SN1 or as the players hear it in stadium on SN. The choice is yours! pic.twitter.com/vPp9UQcQwg

So we asked fans in late May, after we’d already seen a few leagues return, such as the Bundesliga and K-League, what they would prefer. Watch the game with artificial noise to add atmosphere, or watch it ‘as is’ with no fan noise?… 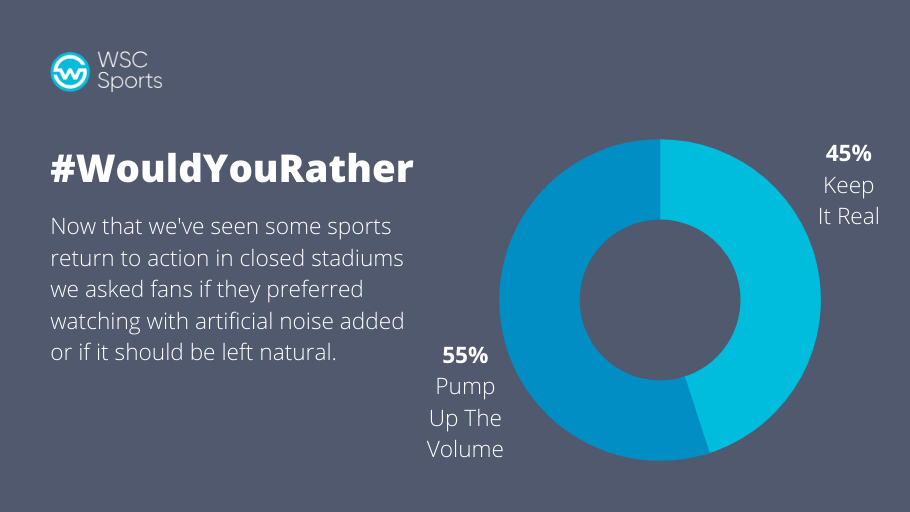 It was a much closer call than our other two poll results, with 55% preferring to watch the action with artificial noise added. It does help make the game feel closer to the ‘real thing’, which is why the majority prefer it.

However, it has been kind of cool, and a unique experience, to hear the players and coaches shouting to each other when you watch a game without any added fan noise. Although some players may have to be little careful with what they say…

Until it’s safe for the fans to return to stadiums we can expect a lot more of these new technologies being developed. This period is really paving the way for new sports-tech to be trialed on the biggest stage, when they normally wouldn’t stand a chance of getting permission.

It may be a long time yet until fans are able to return to venues, so this really could prove to be a turning point for additional technologies such as Augmented Reality and Virtual Reality to break through, and if they prove successful then they may become mainstream and part of fans sports day routines.

We hope you enjoyed the insights these polls give. We know the results may not be ‘in-depth’ studies, but they give us all a better idea of what fans and sports-tech professionals think during this time and signals at their preferences moving forward as the action continues to return.

What do you think of the new tech being trialed in sports? Are you still watching Esports now the action is back? Let us know what you think in the comments below.