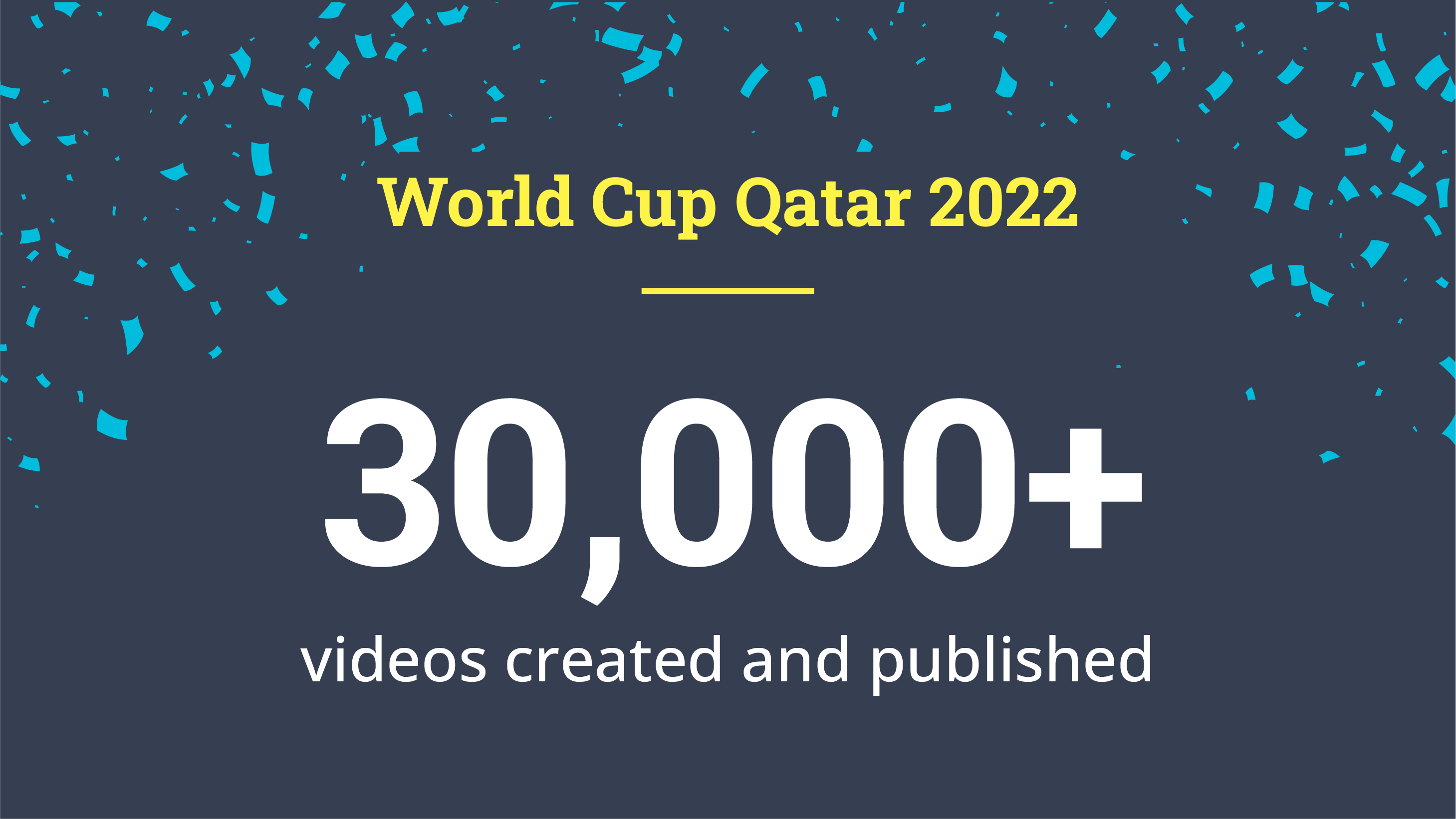 WSC Sports: The AI Highlights Behind the 2022 World Cup in Qatar

The biggest sporting event on the planet has come to an end! Lionel Messi fulfilled his destiny, inspiring Argentina to their third World Cup final win, solidifying himself as football’s GOAT in the process.

The FIFA World Cup in Qatar will be remembered vividly for so many reasons for years to come, and of course on the pitch there was some unbelievable football on display. A whopping 64 games were packed into less than a month’s worth of action and the only way to stay on top of everything that occurred was through highlights.

Whether it was a moment of individual brilliance, or a memorable team goal, highlights of all the best bits were automatically created and distributed around the world in real-time thanks to AI technology from WSC Sports.

Some of the biggest broadcasters and rights holders around the world used the WSC Sports platform to create highlights and make them available to fans in real time. In total, more than 30,000 highlights were created during the tournament (based on usage data across WSC Sports’ clients) and were shared across social media, websites, apps, OTTs and other digital channels.

But which moments were the most highlight-worthy? We dug into the numbers to showcase the videos these rights holders created to tell the story of Qatar 2022.

With so much talent on the pitch, World Cup finals can often be underwhelming affairs, with each team playing conservatively so as not to risk conceding a goal.

That was simply not the case in Qatar. For 70 minutes Argentina dominated the game leading 2-0, putting themselves within touching distance of lifting the cup. But then it really got entertaining as Kyllian Mbappé’s quickfire double left Argentina shell-shocked, and the game went to extra time. Another goal from Messi and Mbappé in extra time set up an excruciating finish on penalties. If you saw the game, you already know what happened next!

Six goals plus all the drama of extra time and penalties cemented Argentina vs France as the game that had the most highlights – more than 800!

FIFA are calling it the greatest final ever. You can watch the highlights here.

Interestingly France’s 3-1 win over Poland was in the number two spot, Costa Rica and Germany’s 2-4 clash was in third, Portugal’s demolition job on Switzerland 6-1 came in fourth, and the feisty 2-2 quarter-final between the Netherlands and Argentina finished out the top 5. Messi’s penalty on 74 minutes sparked wild celebrations…

Come for the goal, stay for the celebrations! 🔥#FIFAWorldCup | #Qatar2022 pic.twitter.com/rjlcMmUGnx

What can we say, Messi smashed it. Over 1,800 highlights from Qatar were of Messi alone!

Next up came the World Cup top scorer Mbappé (8), with more than 1,200 highlights, followed by compatriot Oliver Giroud whose important goals (4) were crucial to France’s route to the final.

In this World Cup we sadly said ‘adios’ to a number of football legends. Modric, Messi, Ronaldo, Bale, and Lewandowski, all likely won’t be seen in four years time. So it was great to see some fresh faces light up the competition to show us what the future holds. None were more electrifying than 23-year-old Cody Gakpo from the Netherlands, and Argentina’s 22-year-old Julián Álvarez, who finished in fourth and fifth place respectively on our list of players with the most highlights.

There’s not really much surprise to see Argentina top the list as the team that had the most highlights created. At the end of the day they were the champions, and despite the early shock defeat to Saudi Arabia in the group stage, they played some wonderful football led by their talisman Messi. Over 4,000 highlights from Qatar focused solely on the brilliant performance of Argentina.

France, Croatia and Morocco, who all came so close to World Cup glory, also rounded out the top four, but it was Portugal who surprisingly ousted the likes of entertainers Brazil, and other semi-finalists England and the Netherlands, for the fifth spot of teams with the most highlights created. 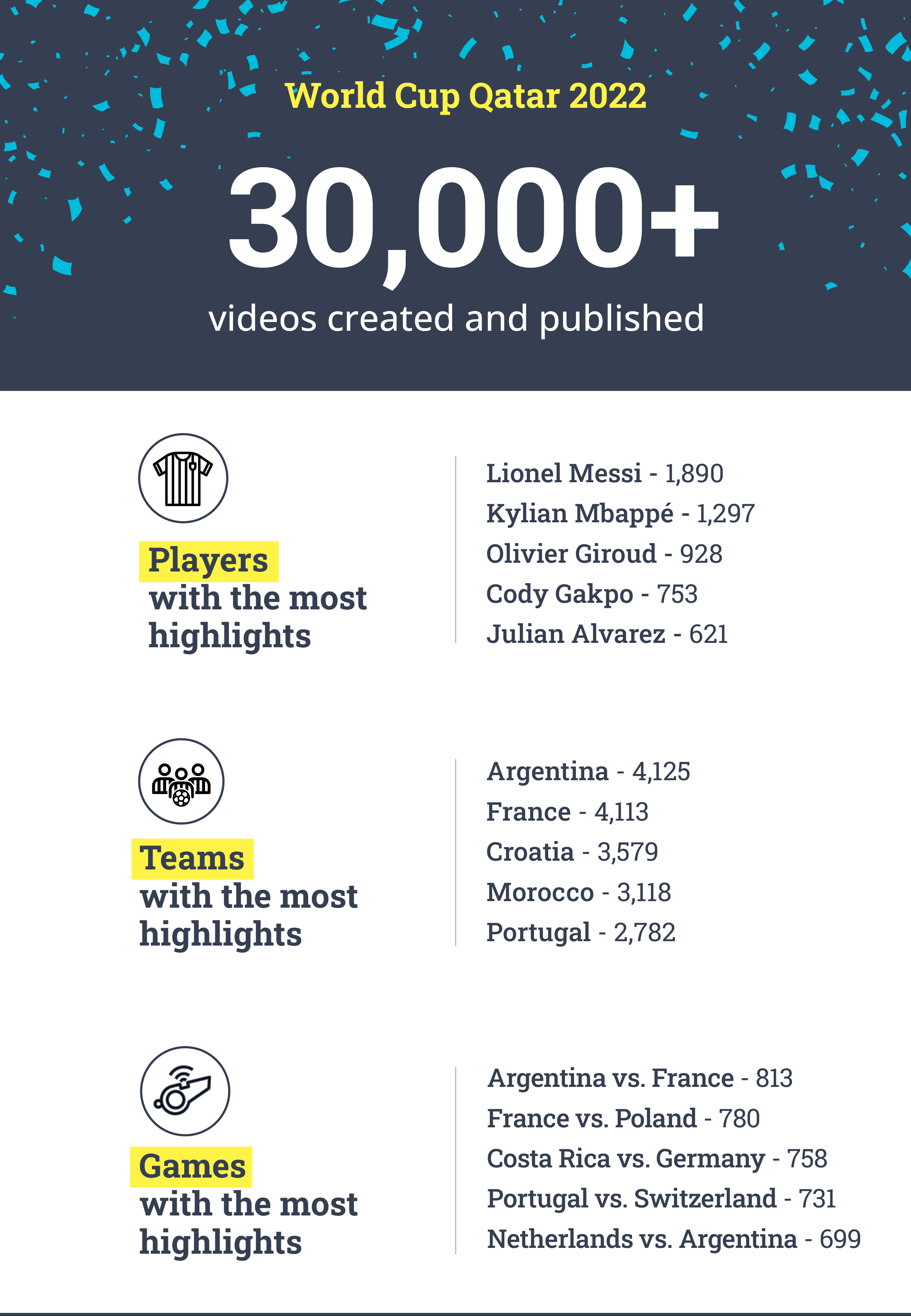 Finally something Argentina didn’t win! Early tournament favourites Brazil’s Richarlison produced a moment of individual brilliance in the 73rd minute against Serbia to score his second of the game and undoubtedly most people’s goal of the tournament, by far.

Voted by you and only you:

🕊🇧🇷 @richarlison97's bicycle kick is one for the books and your 🥇 Hyundai Goal Of The Tournament! #HyundaiGOTT2022 | #FIFAWorldCup pic.twitter.com/ZADZr56ds9

Mbappé bagged 8 goals in Qatar, none more impressive than his gorgeous 81st minute leveller in the final with Argentina.

Seeing as we’re back talking about Argentina again, Messi’s long range strike in the 64th minute vs Mexico was third on our list. Wout Weghorst’s outrageous goal from a cheeky Netherland’s free kick in the 11th and final minute of stoppage time secured the fourth spot and Mbappé rounded out the top 5 with his last minute curling effort vs Poland.

Just as important as any goal, some would argue more important, were of course the goalkeeper saves. There were some unbelievable stops made by the best men between the sticks from all over the globe.

Morocco’s Yassine Bounou had an epic tournament showcased perfectly by this save in the 82nd minute against Portugal, stopping João Félix’s shot that was destined for the back of the net. This was the save that had the most number of highlights created for it from the tournament.

Save of the tournament for me! pic.twitter.com/vvQ9sufizL

There were notable stops by Keylor Navas (75th min – Costa Rica vs Germany) and Manuel Neuer (72nd min – Germany vs Japan). Cameroon’s Devis Epassy kept out Gabriel Jesus early on in the 13th minute to record an impressive win over Brazil in the group stages. And World Cup winner Emiliano Martínez’s stop in 90+6 mins against Australia in the Round of 16 showed just how important that save was – imagine what could have happened had that gone in, it could have all been so different!

Let’s finish up by looking at some unbelievable set-plays. The aforementioned Netherlands routine was simply incredible. But what about those direct free-kicks that sailed straight into the net? There were plenty of them too…

Mexico’s Luis Chávez’s glorious long range belter came first on our list for free-kicks with the most highlights created. A truly memorable strike!

Coming in second place, Marcus Rashford settled English nerves in the group stage against neighbours Wales, with this powerful free-kick to send the Welshmen home and England through to the next round.

Other notable goals from free-kicks included Abdelhamid Sabiri’s effort for Morocco against Belgium, and Strahinja Pavlović’s equaliser for Serbia in their game with Cameroon. 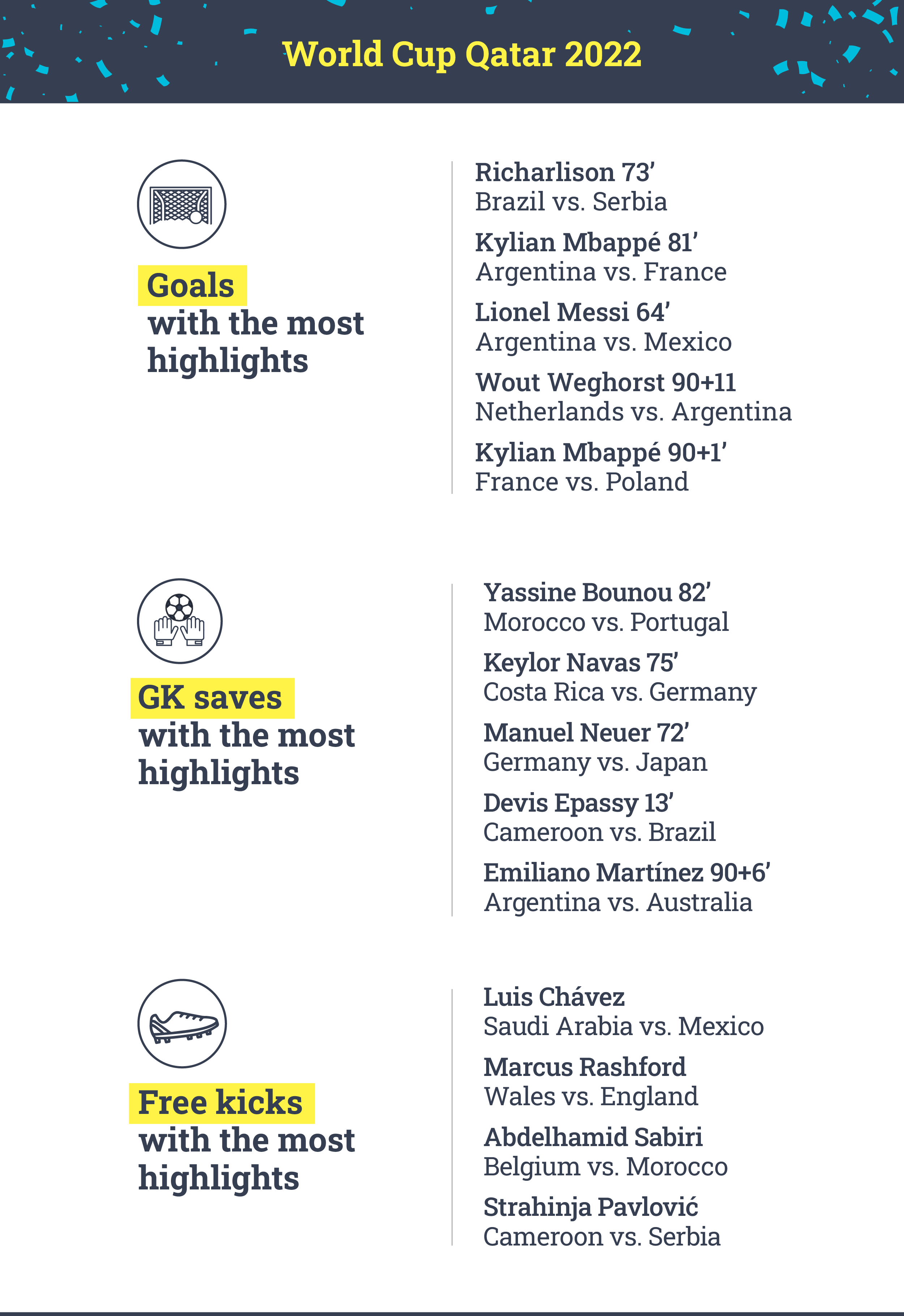 So there you have it, a comprehensive breakdown of the moments deemed most highlight-worthy by our global clients from the 2022 FIFA World Cup in Qatar. We were delighted to play such a pivotal role in bringing all the action to fans in every corner of the planet. We can’t wait to bring you more amazing highlights of your favourite sport in 2023.